Reported via mobile in the Complaint category anonymously at 08:33, Tuesday 24 January 2023 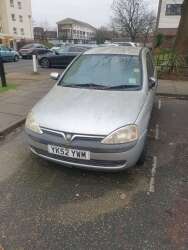 This car has been abandoned in 3 car parking space by block no. 200 to 207 since August 2022 (approximately) and since Cadent is occupying many spaces in this section until March would you kindly come and remove this decaying eyesore as soon as possible?! Many thanks.