Lots of rubbish under bushes

Reported via mobile in the Fly tipping category anonymously at 13:27, Saturday 9 January 2021 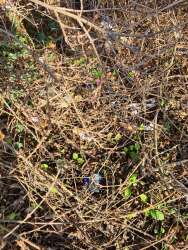