Reported via iOS in the Graffiti or Flyposting (not offensive) category anonymously at 13:37, Wednesday 6 January 2021 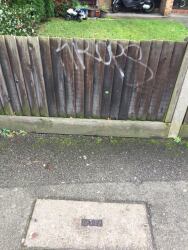