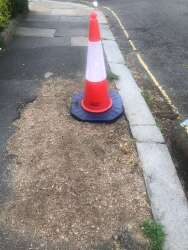 You removed a rotting tree from in front of 43 Dale Street (W4 2BY) in December and ever since the pavement has been left open and damaged, with an orange cone there, which would indicate that something further is going to be done. However it has now been 6 months and no further action has been taken to either plant a new tree or repair the damaged pavement left behind after the tree removal.

Please could something be done to repair the pavement in this location? Thanks!