Reported via iOS in the Dog fouling category by Aneel Odhwani at 10:34, Tuesday 14 January 2020 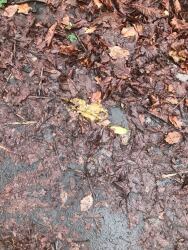 Poo on alley beside Wheatlands. Between the second and third lamppost heading towards Wheatlands, after the alley merges into one path.