Reported in the Dying or dangerous tree category anonymously at 17:24, Friday 10 January 2020 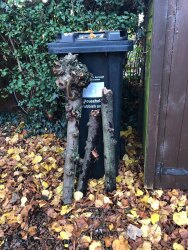 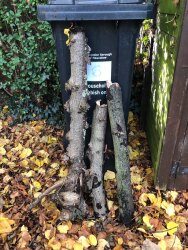 The tree outside No.4&6 GPT Was originally down to be taken out as has fungus.this was around Spring 2019. Following resident representations decision made to hard pollard to try and save the tree. This was due Sept 2019 but nothing done. During heavy winds late 2019 this huge branch fell and broke ( I tripped over it in the dark and damaged my leg. It is REALLY heavy. Photo propped up against my black bin for relative side ( branches look smaller than they are as I had to slant to prop up). If this had landed on a child, person, vehicle or other property it could have done serious damage (it could have killed a child), other than just injure me. Please pollard urgently. I have the branch if you need to inspect it though will shortly be disposing if it ( much too large for my garden bags do am going to have to drive it to the recycling centre myself). Other smaller branches (around 4cm in diameter) fall regularly. Please let me know if you want to the branch by return, and advise when pollarding will take place. Have been trying to report this unsuccessfully by phone since it dropped but keep getting cut off from your end. Thank you, Jackie Eastham.